In the Night Garden Pick a Picture Storyteller 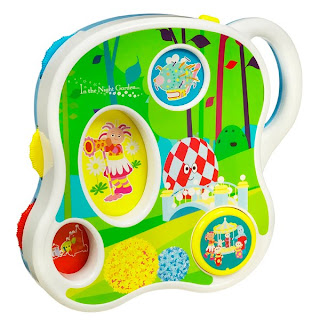 The Tot Testers have been trying another toy from the vast In the Night Garden range.

Called the Pick a Picture Storyteller, the usual ITNG suspects are here, with a possible 25 stories available.

There are 3 wheels on the unit, which can be turned to reveal a different character from the popular show. A big round button is then pressed, and Derek Jacobi, who narrates the programme, tells a story based on one of the adventures seen on TV.

Its a big lump of plastic, with bright colourful illustrations, and a good clear sound. It takes regular AA batteries, which shockingly enough are included, and mercifully also has an on/off switch.

As usual, the amount of packaging is ridiculous for a toy that is quite small in size, and it took 5 minutes of fiddling before we could rescue it and hand it to, a by now distraught that she would never hold it, Big Tot.

Its aimed at the pre-school market, and neither of the Tots had much trouble making it work as required.

At 19.99 (purchased from The Entertainer toyshop), it's quite over priced- yes it does tell a very short snatch of story, but there's no moving images, which I think would have improved the boredom factor of the toy.

I think wait until the sales for this one.