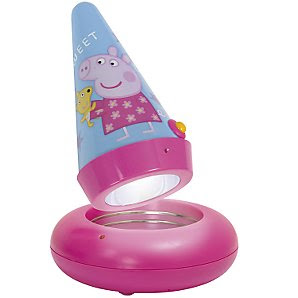 Our Eldest Tot Tester has put a Peppa Pig Night Light and Torch by Worlds Apart through its paces.....

Peppa Pig is something she takes an interest in, its one of her top 10.
So she was immediately taken with this colourful eye catching torch.

She wasn't sure what the base was for at first, and when shown was less interested in the lamp element than cuddling the main torch, as this is where all the characters are printed. The base by comparison is just a pink disk, there to serve the plug to recharge the torch/lamp piece.

However, I feel from a safety perspective this is a welcome design feature- after all, who wants there child cuddling something that plugs into the electricity supply! It would be irresponsible of the manufacturers to have placed detail on this part. So a big pat on the back for this!

The light itself gives off a good warm blue glow- just enough to end childhood fear of the dark, but not enough to keep them awake through a full beam!

The best price I've found online was at Amazon, at 16.32, although most retailers charge 19.99- not a cheap alternative, but considering the features of the light itself, and that it has a popular character on the front (others in the range include Waybuloo, Disney Princess and Toy Story) I feel this is a good buy to furnish a childs room.

The batteries are rechargeable and included, so this makes the lamp cost effective, although it does take normal AA batteries too if you prefer.

The light is aimed at 1 and upwards, and doesn't become hot after use. We have plugged it in and left it on for an hour when Eldest Tot has gone to bed, and on turning it off have felt no problems with overheating or scorching. The torch detaches from the base easily- we let Little Tot aged 18 months have a go and he pulled the torch piece off with little problem. Its also a nice size for little hands to grab.

I would recommend this product for children of a younger age- mainly due to its size and ease of use, and because the characters are aimed squarely at the pre-school market.

Email ThisBlogThis!Share to TwitterShare to FacebookShare to Pinterest
Labels: Household