The Tot Testers were sent a new Lunchtime range to try, which will soon be selling in Sainsburys stores. 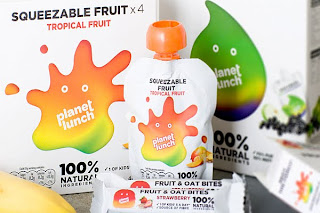 Called "Planet Lunch", the range is designed to make it easier for Mum's to fill their kids lunchboxes with a good healthy option which their child will eat.

The range is made from 100% natural ingredients, and is reasonably priced too.

The packaging will appeal to children, as it makes less of the "Healthy" part and features funky characters.

I tried these on the eldest Tot Tester-who is notoriously fussy-to see whether she would be pleased to replace her current lunchtime favourite of cheese and pork pies, washed down with Strawberry milkshake, for a healthy alternative.

First up for her delectation was a Fruit and Oat bite bar, in Strawberry.

The bar is cleverly molded to the shape of a regular chocolate bar, with little chunks, although the oats contained with the strawberry is clearly visible. There are 4 chunks in each bar, and they are easy to hold. She was unsure at first- and sort of looked at it in a confused manner! But when I took a chunk and popped it into my mouth, she got the idea, and happily chomped the rest down. I have to say, the taste of strawberry is strong, there' no chance of it being "strawberry essence" rather than the real thing.

The bars themselves count as one of a child's five a day- and as we are constantly being told how important these are (a parent can't even watch The Simpsons now without being told not to follow what they eat!), this makes it easy for us!

Next up was a drink. We tried the Juice and Water drink in orange and pear. It promises that its made with 70% pure juice, and 30% water. Again, the packaging is simple, with a little alien character on the front to appeal to the target market. Its a good alternative to the old-fashioned dilutable option, which has to be made in advance when on the go, as this is ready diluted.

The only niggle we have with these, as she drank them with no complaint, was the Non-spill packaging, which I think some younger children may find a problem- we had to pour ours into a cup-they have to be squeezed quite hard before anything comes out, so maybe a straw option may be a good idea?

The Family Panels favorite were the Bread Bites. Delicious! They are a direct alternative to salty and fatty crisps, an old favourite of the school lunchbox.

They are packaged in a very handy bag which opens with a small hand sized opening, so there's no spilling everywhere due to exploding bags.

We had the garlic bread variety, and they really were lovely. The unique thing about these is that they contain vegetables as flavouring, rather than the usual E numbers. I spied Carrot in there! And I can never usually get the tots to eat veg- but they liked these so much they got quite annoyed when Gadget Dad tried to pinch some! High praise indeed.

We also tried both the Squeezy Fruit (messy, and I wouldn't recommend for younger children if unsupervised, but tasty), and the Stick and Dip packs too-these were popular, due to the dip being similar to Ketchup, but with no added sugar. They do put those of a certain age in mind of the "chip sticks" crisps we used to get in our school lunch boxes! 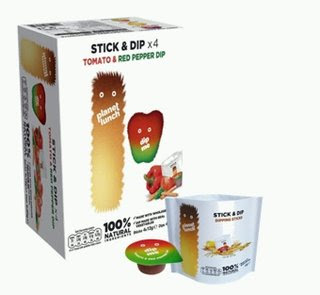 The whole range, tested on school children before us, costs a cheap and cheerful £2.29, and it's worth every penny for the bread bites alone. To see the Tots voluntarily eating something that wasn't a sweetie or unhealthy snack was great, and the Family Panel will be buying these.

They are all handily sized for traveling, and although the drink may require decanting into a cup for younger children, I think these will be a welcome edition to many a busy Mum's cupboard, knowing that they can be flung, last minute, into a Lunch box, but are not going to fill our children full of saturated fat and the much maligned preservatives and sugar.

There is also a handy website for the kids to try out- it can be accessed at www.planetlunch.co.uk. It contains five different platforms or worlds, depending on which character the child clicks on, and is full of games linked to healthy eating.

It is so difficult to give children a healthy option when the large majority of the time they will refuse to eat anything which is not shaped like a dinosaur or a neon-bright-from-colourings drink, so the fact that these can be given as an alternative and look just like anything they would normally have in their Lunch packs is a great idea, providing variety to curb boredom from eating the same thing day in day out- well done Sainsburys!