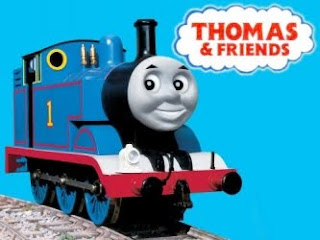 The Tot Testers have been dragged away from toys for 45 minutes of Thomas The Tank Engine, before it appears on Milkshake.

The whole family sat down to watch, with promises of new CGi Technology, and a new character too.

The Tots liked this, and happily sat down and watched it all the way through, not once but twice. Big Tot especially likes the song at the end of the episodes, which handily have the words on the bottom, karaoke style, to join in with.

As a child of the 80s, 20SomethingMum was also intrigued by the changes to what was once one of her favorite shows.

The new CGi is impressive- its clear as you'd expect, and Gadget Dad felt it looked very realistic. It made a big change to see the boy who stands on the bridge in the opening credits actually waving and not standing static!

However, from an original fans point of view, I felt that with this, and the new individual character voices, that some parents will feel the "imagination" side of Thomas has been sadly lost in the race to move with the times.

The new character, Charlie, fits in very well with the old faithfuls, like Thomas, Percy and James, and takes nothing away from the story. There are also newer characters taken from an earlier DVD, in the shape of Hiro, Victor and Kevin.

Obviously, all TV shows have to update and refresh, especially one which has been around as long as Thomas. Obviously, parents, despite lamenting the loss of the old school touch of magic, would rather see these changes than see the demise of another favorite from our screens.

The episodes will be available on Five's Milkshake from Monday at 8.25am.