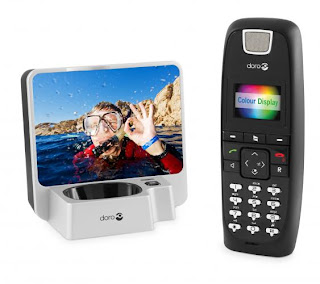 Doro.co.uk have asked The Family Panel to try out one of their new Form home telephone and answer machines. Now being that we don't have a telephone line we gave this to resident family technophobe, the children's Uncle.

The Form 20 is a compact handset and answer machine, with the added feature that the back cradle of the phone doubles as a photoframe.

Uncle found the phone very simple to install and use. The sound quality during a call is superb, it has a built in phonebook which is similar to that of a mobile phone, and it includes speakerphone which again is crystal clear, and can be turned up or down.

The answer machine again was simple to use, and he had great fun picking one out (well, he is a bachelor!) Its built into the main telephone rather than having a bulky separate piece.

The photo frame element is a nice touch as most phones are essentially a boring piece of molded plastic which serve one purpose but look very boring. With this back lit photo holder, when the owner becomes bored with the look of the handset, they can just pop a new photo in the back.

The phone has a good range and comes with batteries.

At just under twenty pounds (at Caboodle.co.uk) it wont break the bank either.

An all round good product even the most technophobic of us can operate with ease!