Glow in the Dark Cup Holder 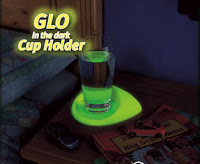 Gadget Dad thought he had seen it all until he got to try the latest innovation from webiste Glow, so what did he think?

When I opened this I was baffled. A cup holder, I thought, was one of those "gift for a person who has everything", but a glow in the dark one seemed a step beyond even that!
But when I read the accompanying info from the company, I did realise how handy something of this kind is.

It is marketed as a "cup" holder, however, its also just the right size for a bottle of night time juice.

If you have a child like Little Tot who still wakes in the night, the last thing you or your partner wants to keep doing is turning on lights in the bedroom looking for a bottle in the dark, or worse, have to trek all the way downstairs to the fridge at 3am. If your child is also like Little Tot, the quicker you can get a bottle to them to comfort them, the better for everyone!

With this easy to install (and I hasten to point out that all the relevant bits bar the drill are included so no need to hunt down screws) item, you can pop a bottle or a cup on it by the bed, and on hearing the child, or wanting a sip of something yourself, its soft glow makes it simple.

It would also just as easily be a good item for an older child's bedroom, to avoid knocking full glasses of drink over in the night- hands up how many of you have done this and fused your alarm clock!

Its not an overpoweringly bright green light, it gives off just enough to see in the dark, and "charges" itself with daylight during the day.

Again, its not going to be in any "major innovations of the 21st century" lists, but it serves its purpose well, and before you snigger with bafflement like I did, just think how many stubbed toes and disturbed by the Other Half turning lights on sleepless nights you'll bring to an end!

A simple but effective gadget, which can be purchased at Glow's online store