Special Feature: Get Sun Safe with the Kids this Summer

The Tot Testers love the summer, it means playing in the park and garden, and ice creams too, as well as the paddling pool coming out from its Winter hibernation. But it also means its time for us parents to get sun safe, so here are some easy ways to help.

ALWAYS WEAR SUNSCREEN
Obviously, everyone knows about the slipping on a hat and slopping on sunscreen, but this isn't always popular with the kids. The Tots are no different, and Big Tot is not a fan of having anything put on or rubbed in her face.
But those ever helpful boffins in skin care have come up with alternatives to runny and messy creams, which can be hard to get on the children, and can also leak in nappy bags leaving everything covered in sloppy, greasy cream.

First up is Malibu have their Factor 30 in a handy spray bottle- making it as easy as pointing the bottle and spraying a fine mist over the child-however much they wriggle! It is, as you would expect, a high protection with UV and UVA filters giving peace of mind. Its also water resistant for paddling pools (however they do recommend reapplying if swimming for long amounts of time).

Reassuringly, its dermatologically tested and didn't upset Little Tot's often sensitive toddler skin. It doesn't have that nasty chemical smell that some of these creams can have, which can be really overpowering.

It can still be fiddly on the face, as you obviously have to avoid the eyes when younger children don't yet know what "shut your eyes" means (in Big Tots it means blink very quickly!)  and if you have to get in quite close it does spray on a bit thick. So although not completely fool proof, its an improvement.
At £4.50 (best price) for 200ml, its inexpensive for something that will last a while too.

Next up is Sun Sense Toddler Milk. Specially developed for the more sensitive skin of a baby or Toddler, the cream comes not in a traditional bottle, but as a roll on. Its very simple to use, in fact it couldn't be simpler.

Just like a roll on deodorant stick, it works by rolling it over the arms or face, and it dispense a little cream which sinks into the skin. The Tots loved the novelty of this, and Big Tot especially found it hilarious when it was rolled up her nose, so no arguments over standing still.

Its slightly higher Factor at 50, and again water, UV and UVA resistant too. Made in Australia to their governments stringent sunscreen regulations, it really is a great little product. It has the added bonus that it comes in a small enough size to be slung in the change bag, and it doesn't leak either as it only comes out when its rolled over the skin. Its light and absorbs straight in too, so no messing about rubbing in cream for ages!

It is more expensive than the Malibu cream, at £7.25 for 50ml, but it is one of the few readily available sun protection creams which is aimed not at a general catch all "Child" age group, but specifically for the more prone to reaction toddler skin type.

Another must have summer essi but one that a lot of parents forget (and quite a few pushchair manufacturers don't include as standard in Buggy packages) is the Buggy shade.

The one which The Family Panel have struggled with over the years, the simple springy Umbrella shade has caused so many accidents by springing at people in shops, and never seems to cover the sun from the Tot no matter where its positioned.

So we were more than happy to try out a Rayshade made by Kiddopotamus, and sold via The Little Sunflowers website.

This is amazing! It is very easy to fit, and to fold away when not using. It completely covers the child (or children as they are available in double too!).

But its not just the idiot proof nature of this that means we give it a Recommended thumbs up. The stretchy material has been made to protect from UV and UVA, and it has been tested in both the USA and Australia to give 50+UPF rating. 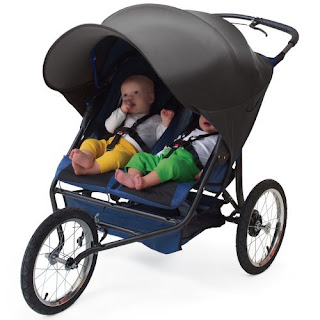 But we all know the British summer can change from blistering hot to monsoon rain in ten seconds flat. With your usual Sun shade, that would mean removing it, folding away, and then fiddling with the raincover, usually whilst disgruntled shoppers push past you in a shop doorway!

None of thats necessary with the Rayshade. Its water resistant too, so is dual purpose- its almost as if they designed it with us Brits in mind!

It is incredibly clever as it fits around the existing buggy hood, can be extended on all sides depending on the angle of the sun, and is breathable. It comes with its own pouch, and for something of its size when on the pushchair, it rolls down to fit neatly in the change bag.

At £19.99 for a single size, and £24.99 for a double size, its reasonably priced, and fits all standard buggy sizes. We are happy to give this a Must Have Family Panel recommendation.

Email ThisBlogThis!Share to TwitterShare to FacebookShare to Pinterest
Labels: Pamper