The Tot Testers love food that they can pick up and munch on, and cheese is rated highly with them and 20SomethingMum as there's no mess involved, and its full of calcium. So, how did they rate Leerdammers new block cheese?
In the Family Panel household, we eat a lot of cheese, and its always on the weekly shopping list. We generally just buy a big block of shops own brand Mature cheddar, so we hadn't tried Leerdammer before, although with the mad adverts they run on TV it was a brand we were aware of!
We tried the Original variety first. The Tot Testers had a mixed response. Little Tot wasn't keen, and refused to eat it, whereas Big Tot liked it so much, she was found quite a few times, in our fridge eating it from the packet! 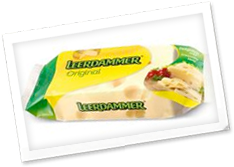 The small amount I was allowed to try before she ran off with the rest, to be honest, I was more in agreement with Little Tot.
It was quite a weird texture and smell, and put me in mind of fake rubber cheese. It also had a strange taste too. I could taste the nuttiness that was promised, but that was what made it taste unpleasant.
It is OK to cook with though, as it grates quite easily, and melts quickly over hot pasta or baked potato. 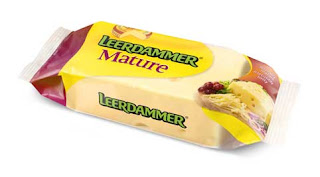 I much preferred, as did Little Tot, the Mature block variety. I think because it wasn't quite as rubbery, and the taste of cheese was more prominent than the nuttiness of the Original flavour. Once again, Big Tot happily ate handfuls of the stuff! It was even nicer to cook with, and really added a great flavour to a warm salad that I grated it over with olive oil. The two went really nicely together. It was also great on New Potatoes too.
Overall, a mixed response, and something I would be more likely to buy again if the supermarket was running a promotion with a lower price- at between £2.14 for the Mature and £1.96 for the Original* for 225g its more expensive than standard Mature cheeses.

You can find more recipe suggestions at the website.