20Somethingmum loves a good read, when she can get five minutes peace from the Tots! So when she does sit down with a book, its got to be good. Did Goodbye Lily meet her needs?......

I hadn't heard of Carole Patti Clarke before, but reading that she was born to Indian/Irish parents I expected a taste of the exotic. 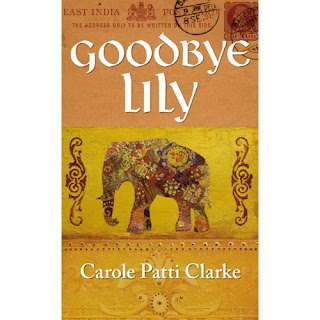 The book is no easy read, its dark, sad and will require a box of tissues at times. Bringing us the written memoirs of the character Lorne's Uncle Dennis, we explore how both the Niece and Uncle support each other in the days after Lorne's elder sister, Lily's, death, and what she meant to both of them.
We learn pretty early on that both Uncle Dennis and Lorne had difficult upbringings due to wayward Mothers.
In Dennis' case his Mother, Grace, though much beloved by him, was a loose woman in Calcutta who regualrly asked him to cover for her with his long suffering father Ernest.
Whilst Lorne's own Mother, Uncle Dennis' half sister Jenny, was a violent mother who didn't care for her youngest daughter at all, and the scars of whose actions are yet to heel even in Lorne's adult years.
The story is well set out, with amazingly colourful dialogue- Clarkes written imagery easily transports you back to Calcutta and the heat and differences between the expats and their servants (like the wickedly funny BoBo). It also gives an insight into the emergence of wars in the country in the later years of Dennis' teens, and the eventual hurriedness with which he and his father are forced to leave the country of his birth, and his sweetheart, behind.

As ever, grief, and loss, of either a sister, mother or indeed country, is never going to be a light read, but this book is so well written it could be taken as a biography rather than a work of fiction.

I would, however, have liked to read more about the much mentioned, but never thoroughly gone over, Rose Cottage, scene of Lorne's and Lily's youth, and Jenny's eventual reign of terror over her children. We get a short insight of  Christmas years before, but only a mere taster, and I would ave preferred to read more of this than of Dennis' time at Boarding School,and very long drawn out illness whilst there, which I thought didn't really "go anywhere" apart from he got better!

We get a view from Dennis that his sister, prior to leaving Calcutta, was a playful and mischeivious beauty, so it would be interesting to the reader to learn what made her become such a monster to Lorne in the years after she came to Britain with her husband and newborn Lily.

I really do hope that there will be a further book, based on Lorne's promise in this novel that she was writing about Rose Cottage at the time of Lily's llness and eventual death. I also would love to know if she does go back to meet a man who takes her eye, or if she goes to London with Dennis.

With characters that you want to know everything about, this is a brilliant read and a welcome departure from the fluffy chic-lit woman are constantly thrown from every publisher!

Goodbye Lily is available to buy now from Amazon.

Email ThisBlogThis!Share to TwitterShare to FacebookShare to Pinterest
Labels: Books