Kids today get into computing younger, but what do you do to stop them breaking your prize PC? Leapfrog have introduced a revamp of their original Laptop, called "My Own Leaptop", suitable for Big Tot to try out.
Big Tot is intrigued by computers- bearing in mind her parents are both self confessed computer and net geeks, its hardly surprising. So she was excited to try out the Leapfrog version. 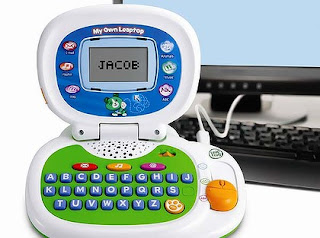 It is just the right size for a toddlers lap, and as a toy it needs no adult supervision once removed from the box.There is an option to upload personalised info via the Leapfrog site, so it also means its a toy that they wont get bored of as the parent can change the games as often as required. The adult needs to download the info from their PC, but that's free to do, as is the info and extra games and music.
With a friendly dog character, which Big Tot recognised from her brothers toy Scout, it guides the child in what to press, and teaches them basics about animals, letters and music. It can get slightly forceful at teling the child to "push a letter button", but I think this is probably more annoying to a parent than a child.
Now, I would like to have said it was bulky and could take the abuse thrown at it by the Tot Testers. However, despite being dropped downstairs and generally thrown about, which it survived, a mere fortnight after it was first removed from the box, Little Tot rendered it useless.
How? By pouring juice on it.
It was opened up at the back, and valiantly dried out via hair dryer and Gadget Dad, but sadly, it has gone to the big toy box in the sky.
This is why adults don't like to give their children access to their computer equipment, but I would have like to have seen it survive the juice- it was about a quarter of a small beaker, but even so, I wouldn't have thought it would be enough to damage it. 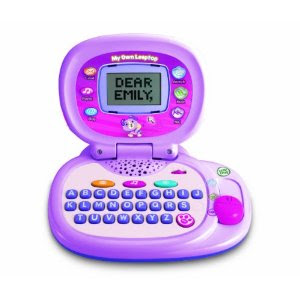 Sadly, we couldn't test the net options out, but we think if you don't allow juice or liquid around it, it would have been a long term favourite of Big Tots.

The My First Leaptop is available in Pink or Green, at £19.99 (Amazon)