The Tot Testers have had rather a rotten cold this week, so what better way to spend the day indoors with some child friendly comedy fantasy on DVD. We watched the soon to be released on DVD Tooth Fairy. So was it a family friendly film, or one for the kids viewing only?
The film stars Dwayne "The Rock" Johnson, who is far better known for his hard man roles (and wrestling) than being in cutesy family films. However, the role isn't too strenuous for him. 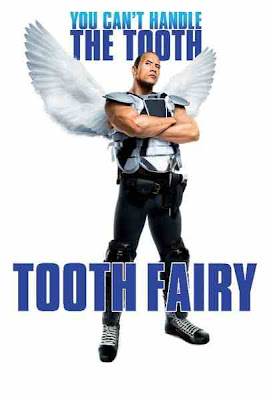 In it, he plays Dereck Thompson (which sounds just a little like his own name!) an ice hockey player who has sadly passed his glory days, and now prefers to knock out opponents teeth on the rink than the puck into a goal. Hence he has been given the not very macho nickname of "the Tooth Fairy". Off the ice, Johnson's character is dating a single mum- very current- and decides to tell her young daughter that the real Tooth Fairy doesn't exist.
Queue the fantasy, as the very real Tooth Fairy herself takes revenge on the macho Ice Hockey player, with slapstick and funny results, a supporting cast including the legend of such films that is Dame Julie Andrews, Golden Globe Nominee Ashley Judd (cast for the Dad's surely?) and Ricky Gervais' side kick Stephen Merchant.
This film pitches just at the right place for kids, with the bitter sweet message of magic and wonder being real, mixed with the modern day blended family- something which was lacking in films until the last 5 years as studios desperately tried to hang on to the nuclear perfect family image and topped off with Man dressed as fairy caper.
Johnson is built for the role, as a former tough guy of the wrestling scene, he can play the part with warmth and knowledge. You want to hate him desperately but end up feeling quite sorry for him due to the actions of the Tooth Fairy, and the tasks he is set.
At times laugh out loud funny, this film spans the ages, and is a classic in the same way as Tim Allen as Father Christmas is still funny now.
The DVD has amusing extras including Fairyoke (which is exactly what it sounds like), as well as a gag reel.
You can buy The Tooth Fairy from tomorrow.
A great rainy day film.