Big Tot has been getting a few strange looks whilst out in the local shops recently, and its all been caused by the Baby Annabell doll she has been trying out. Find out more below....
Dolls. Love them or not (and I'm talking about Gadget Dad here) they are an inescapable part of a little girls childhood. But they've come a long way since my first doll in the mid 1980s.
Now, its not enough to have lots of clothes and accessories to be getting along with. Now they look and even sound exactly like a real baby!
The Baby Annabell doll has been around for a number of years, and was voted the UKs most popular doll in 2002. There have different versions released over time, and this is version 5 of the full sized doll. 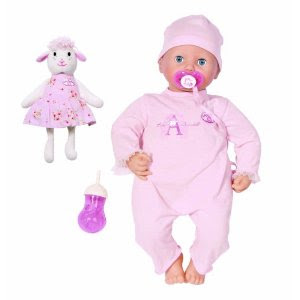 The doll comes complete with an outfit, a baby bottle, hat and musical Lamb toy of its own. It does require batteries, so bear this in mind if its going to be taken out of the box to be played with straight away.
The doll has quite staggeringly realistic facial features, with eyes which close shut and blink- yes blink- when the doll is switched on at the back (the battery pack and switch are both well hidden from little fingers at the inside back of the doll).
So, what makes this doll different from other talking dolls?
Well, for starters it interacts with the lamb toy, and when the lamb is placed in front of the doll and switched on (yes this requires more batteries), it plays a soothing melody, which makes the doll coo and laugh.
The doll also sucks on its bottle and dummy when placed in its slot in the mouth. Not just makes a sucking noise to make the child imagine a suckling baby. Oh no, the mouth moves in much the way a real baby would suck on a dummy or bottle! It also contentedly flutters its eyes open and shut, and when it falls asleep after a period of soothing bottle or dummy, or just a cuddle from the child, it makes a breathing and soft snoring sound. It cries if she is knocked into or woken up (Little Tot especially liked to make "Baby go wakey" when "Baby go Night Nights", prodding it awake, at which point it would cry, and he would run and hide).
The doll is ridiculous and unnerving to an adult who has children only just having bypassed this same period of age, whilst being magical to a child. Big Tot has taken it everywhere- including to bed, and on one occasion brought it into bed with me when she was awake early- must say there are nicer ways to be woken up other than rolling onto a dolly which immediately cries like a real baby! (had to check that it wasn't one of the Tots as I was half asleep!).
The doll has been an instant hit, apart from two things- one from me as a parent, and one from Big Tot.
From a parents perspective, the doll isn't so much a toy as an investment piece, the doll itself costs between £40-£60 depending on where its purchased, and of course inevitably the child will not want to keep on using the outfit it came with, and will also want the accompanying accessories too, of which there are a wide range to choose from- its almost like having a real baby in that regard too.
From Big Tots viewpoint, she would after playing with the doll or picking it up for longer periods of time complain that it was too heavy for her- because of the technology inside the body and head, it does require serious mechanics inside, and these do make the doll weighty for 3 and a half year old arms to handle.
Overall, it does encourage imaginative play, and Big Tot has really enjoyed having the doll, taking her clothes off, feeding her, and referring to herself as "babies Mummy"- even rushing home from playschool to check her baby was OK.
One other thing it has prepared us for- when the baby cries for longer than 2 seconds, she immediately hands the doll to me for her Mummy to cheer her up! Not boding well for if and when she does make me a Granny!