Big Tot is a great fan of Cbeebies, and ZingZillas is a must watch. So, did simply listening to the four primate characters please our hard to impress Tot? Lets find out.
The ZingZillas have fast become a popular hit for CBeebies, as parents have warmed to them as much as children. Rather than being loud and silly, the main group of primates, who form the ZingZillas band, live on an island and before they perform their songs (or Big Zing) have to solve personal struggles such as an inflated ego, loosing a prized possession, or moving house amongst other topics children can relate to and learn from.
They also have a guest each episode who teaches the band and other island animals, such as DJ who runs the coconut hut cafe, about music from different genres and cultures. It encourages the children to join in with dancing and singing at home.
So, we were very pleased to hear that an album of the series was being released.
Just as in the programme, all the lively tunes featured over the series are here, minus the storyline element.
There are 26 in all, instantly recognisable- and Big Tot loved to try and remember which dance routine the characters had used in each song from the show! They feature such artists as Mezzo Soprano Sarah Connelly CBE, flautist Sir James Galway, popular Scat singer Cleo Laine, Cellist Julian Lloyd-Webber and the BBC Concert Orchestra. 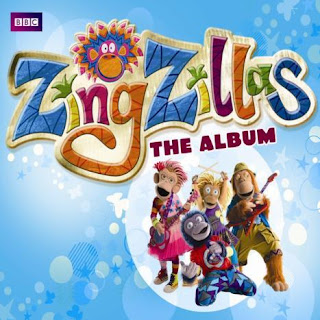 At one point the child can be listening to rock, the next classical, and then to Jazz. Its a great way to introduce something other than nursery rhymes or the top 40 to a child, and see what style they particularly enjoy.
For instance, Big Tot's favourite song is Bhangra Beat, featuring Jugnu Bhangra- she absolutely loves trying to dance along to this with the same Bhangra inspired dance steps. Proving that she has learnt something from the programme enough to practice it when using the soundtrack, and has helped her develop an appreciation for music which isn't from her culture and isn't played in our home.
This has certainly been on constantly in our house, and unlike some kids soundtracks which grow irritating after a few listens, this is actually quite a diverse mix of musical styles, all jolly and fun, and all of which have had even parental toes tapping.
In Big Tot's words- "I love ZingZillas album, I like listening to it, it makes me happy".
Can't say fairer than that!
The ZingZillas Album can be bought from the 4th October, and is available to pre-order from the ZingZillas website.