Its half term week for UK kids, and as is usually the case, the weather is miserable! As resident Toyologists, The Tot Testers have been trying out some toys for indoor play days. And 20somethingmum rates them on mess and fuss factor!

First up is the Crayola Colour Wonder Magic Light Brush (£15.99, Toys R Us).
Crayola has long been famous for craft items, especially their range of chunky crayons, and wash proof pens, making Mum's lives just that bit easier!
The first thing I thought when I saw this was - no, mess, paint!!!! Having just redecorated sections of the house with new cream paint, I had visions of rainbow strips and scribbles everywhere in five minutes. But fear not.
The product uses Clear paint, and much like the Aquadoodle, the Crayola uses lights to add colours to the child's masterpieces when the clear paint is brushed across its special paper.

It comes complete with 6 clear paint pots and a 30 page sketch pad, as well as a brush to "paint" with. The brush requires batteries (not included with the toy) to work, and uses fibre optic bristles to make the painting colourful.
Whilst it says mess free, well, yes and no. The brush requires washing after each use, which isn't ideal to a parent for fuss factor considerations, and also can be quite annoying to an impatient child keen to draw, and to mix the colours, which you can't do. It also takes a while (according to the box ten seconds, but in fact more that 30 seconds) for the Fibre optic bristles to "guess" which colour the brush is being placed in, which again can caused a few hissy tantrums!
I do think its slightly expensive too, and after the first use, the Tots were too busy moaning at the constant bristle washing and time factor, and went back to their crayons and books!
In theory a good idea, not so great in practice in younger children who lack the ability to wait!
Next up, we tried the Moon Sand Sweet Delight Shake Maker set (£14.99, Toys R Us)
Now, here is something I really thought I'd hate. I honestly thought that my walls, carpets and anything in the vicinity would be covered, and forever more would be crusted with it.
Well, in the end you had to prise me away from playing (in a supervising role, obviously) with it too!
Firstly, the box doubles as part of the toy, the thought that has gone in to the product is great. Its like they played with dough products and then tried to make them so as they aren't every parents worst nightmare (I think my bedroom carpet from childhood still bears the scars of dough based play now), and then assessed how that could also be fun for children of most ages.
There are so many bits and pieces to go with the Moon Sand itself that the Tot Testers were spoilt for choice with what to play with or make first. Its also fuss free, as the dough moulds really easily and even the most uncoordinated can press the soft sand into the chunky, easy to wipe clean moulds with ease.
Its lovely and colourful, and smells quite pleasant too, which surprised me as I expected it to be chemically. Little Tot enjoyed the process of making Milkshakes to give to us all, he's quite a chef in the making! And I think Big Tot liked it so much she'd have gladly played with it in her sleep. 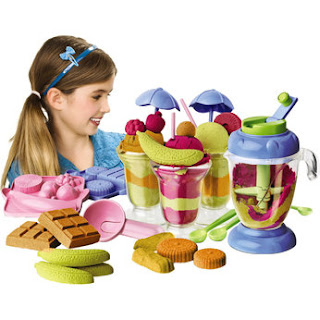 The best part is the fact you can play with it again and again, as the sand, when you can finally get the Tots to put it away for dinnertime, just simply crushes back up ready to reuse. If any is inevitably spilt on carpets, thats no problem either, as it vacuums straight up.
We all love this toy, and cannot recommend it more highly, its a similar price to the Crayola but much more fun and fuss free.
Moving away from Craft Toys, we also tried the Crazy Chefs Game (£6.99, Toys R Us)
Another game which matches fun with hidden doses of education, this Orchard Toys game is quite good fun for a child to play with an adult. T
The rules are simple, and the boards, of which there are 5, as well as the pieces of board representing food stuffs are all wipe clean (a god send as any parent will tell you).

Big Tot enjoyed the game, matching up the pictures on her boards with the items on the smaller squares, getting quite excited at knowing what the pictures were, and learning, in directly, what type of food goes in which meal.
It boosts a child's linguistic and communicative skills whilst being a great game. Which bearing in mind the cheap price of under £10 is impressive.
One thing I would say on a more negative note is that there are a number of smaller pieces representing the food, as well as a board and plastic pointer and if they happen to go amiss or are damaged (by a happy to chew anything at eye level Little Tot), it does make the game ready for the bin, so definitely a toy to be careful with to avoid this happening.
Other than that, perhaps a great toy for a stocking filler or as a gift for a child's birthday party?