The Family Panel have handed the reigns to Teen Niece and her Mum and sent them off to London to watch DIRTY DANCING at the Aldwych Theatre. So, what did our guest reviewers think?

The special performance was just one of hundreds of special events for International Womens Day, as this year marks their centenary.


Starring X Factor runner up and former Dancing on Ice entrant Ray Quinn as Billy, the story works well when transferred from film to stage. 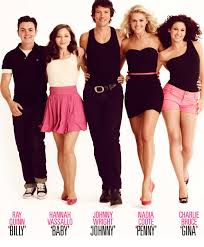 Johnny Wright, playing the Swayze role of Johnny has big shoes to fill, as Swayze is so well known and regarded for the role, but he pulled it off with ease. Quinn was the biggest surprise as we found he was much better on stage than on TV, and almost stole the show entirely.


With the same great music and amazing dance routines, it was certainly an enjoyable and captivating watch, and it is no surprise that the show has broken box office records. It found it easy to get the right mood as set in the film, and quite literally left us both wanting to dance in the aisles.

Sadly no one else felt the same, which lessened the general atmosphere, but we made do with bopping in our seats! Perhaps if I was to point out one negative its that maybe the audience should be encouraged to really join in, as I've been to other shows which did and it really adds a special and memorable something to the experience.


A good all round show that didn't disappoint, and one I'd be happy to see again, perhaps with more audience participation though!


A Family Panel Thumbs Up!


Tickets are available from http://www.dirtydancinglondon.com/