Today's Guest Toy review is by Emma from Mellow Mummy. Emma's daughter is approaching 3 years old and has just discovered the joys of role play - she has been reviewing the Little People Happy Sounds Home by Fisher Price 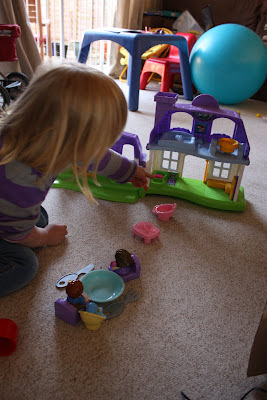 The Happy Sounds Home makes a great first doll's house. We got the Little People Happy Sounds Home at Christmas when my daughter was two and a half and I'll admit that she didn't really show much interest in it for several months. It is only now, three months later that she has started to enjoy playing with it and I put this down to the development of her imagination.

My daughter has learned to role play and simulate real life. At nursery she enjoys 'pretend' games with her friends and in the evenings she likes to play with the little people in her house.

The Happy Sounds House comes with a small family of Fisher Price Little People characters - a mum, dad and baby. The baby comes character can be put into either a little rocking cradle, or into a baby bath. The house features a bedroom, living room, bathroom and a kitchen/utility room and at several points across the house there are interactive noise features such as a washing machine, doorbell or telephone.

We have other Little People characters lying around our house who often get invited round for tea or to sit and enjoy some 'interesting' conversation in the living room of the house.

My daughter likes to put the people to bed and then turn the sun around at the top of the house to indicate that it is night time and then she quietly whispers to us all that it is bedtime. Then she folds the house in half and packs the toy away for the night!

I would say that the Fisher Price Happy Sounds Home is suitable from about 2-4 years old but best suited to an older two-year-old / younger three-year-old. Without lots of further characters or extension points (other pieces to buy), I think the entertainment value won't last her long at this age.