Mellow Mummy is a self-proclaimed curry-addict so was falling over herself to try out the new range of Naan Breads from Warburtons. 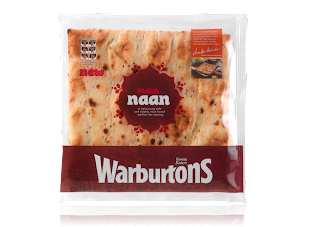 Most supermarket Naan breads are all a bit samey and bare very little resemblance to the real thing (that doesn't mean I don't enjoy them nevertheless).  I was fascinated to see that the new Warburtons Naan Breads looked totally different to all others on the supermarket shelves AND that they bore the name and face of my curry hero, celebrity chef Atul Kocher.  These naans are a real flatbread and look a lot more like the naan you would be served in a restaurant or make at home.  Flat, square (ok, that's a bit weird) but pretty tempting to look at.

I found the plain naan bread to be a bit floppy and soft and I probably should have grilled it to make it a bit crispier.  It tasted gooood though but still lacked the real tandoor flavour and slightly burnt crispiness I craved.  I looked at the nutritional information on the packet and wished that I hadn't.  The less said about that the better! 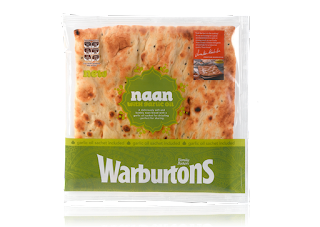 Warburton's garlic naan bread is pretty much the same as the plain one except that it comes with a tiny sachet of garlic oil.  This is a great idea in our house because my three year old, as much as she loves a good curry, would probably prefer the bread on its own leaving myself and my husband to share the oil.  I brushed the oil onto the bread but you could easily drizzle it or just use it as a dipping oil.

I still don't think that the Warburtons naan bread come anywhere near to the real thing but they do make a welcome change from normal supermarket naan breads and I find them easier for soaking up a good dahl or masala.  You can find some lovely indian-inspired recipes to go with your bread on the Warburtons website.