Mellow Mummy, Emma, has been reviewing the new range of healthy children's cereals from BEAR. 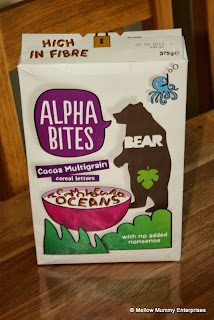 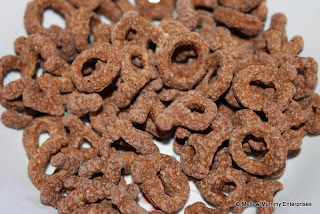 Alphabites are shaped as letters of the alphabet and do my daughter spent quite some time during her first bowlful looking for the letters of her name while munching through her spoonfuls.  Each box has a theme on the back and the front of the box based on one of the letters; our box featured the letter O for Ocean and so it had pictures of sea creatures and a shipwreck on the back which launched several discussions at breakfast times about the things you find under the sea and inspired us to make our own shark spoons with sharp pointy teeth. 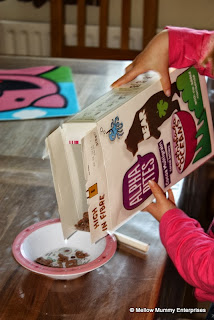 Usually 'fun' cereals for kids normally feature added salt or sugar or strong flavours, neither of which appeal to my eldest daughter and neither of which is something I really want to offer my girls so it is great to see that BEAR have managed to create a fun breakfast cereal that has the sweet appeal for most children but without the added sugar - Alphabites are sweetened with natural coconut nectar and the effect is good; I wouldn't describe this breakfast cereal as a sweet cereal at all, in fact I really think the balance of flavour is great for children and adults alike. 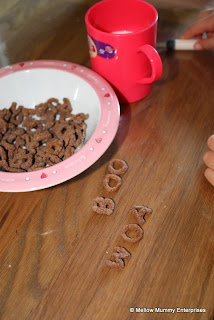 My daughter enjoys spelling out words before she adds her milk to her cereal.  The letters manage to keep their crunch for quite a while after adding the milk.

I'm very impressed by BEAR Alphabites, I think they've done a good job of balancing fun and healthiness in a breakfast cereal.  Alphabites are currently available in Waitrose, Ocado, Planet Organic, Holland and Barratt and Wholefoods.