The Honey Monster is currently touring Tesco stores up and down the country to promote his new WOWs cereal so Mellow Mummy has been finding out all about his new tasty breakfast ideas. 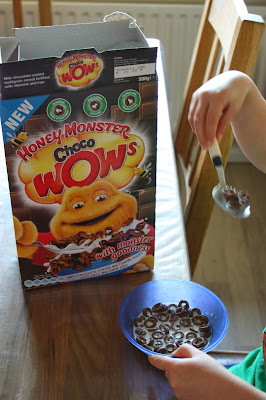 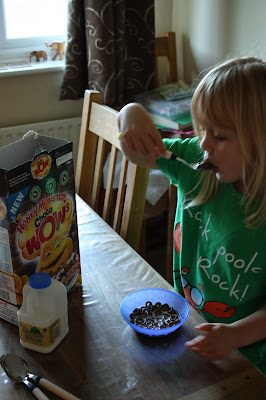 WOWs come in two flavours - Choco and Honey.  Choco Wows are coated in cocoa powder (not a lot, but just enough to add a little bit of sweetness and to turn the milk light brown) and the hoops are covered in oats.  My daughter always claimed she didn't like oats until she tried these!  She also used to suffer from losing interest in a cereal after a couple of days but the Choco WOWs seem to have kept her interest for well over a week.  Yay!

Honey Wows are coated with a sweet honey flavour and small pieces of crisped rice - these make my youngest daughter very happy as it combines the ideas of two of her favourite types of breakfast cereals.

On the packet of the Honey Monster WOWs there are ideas from the Honey Monster of how to stay monster fit.  This seems to have really inspired my eldest daughter who has taken it upon herself to meet all of the challenges... including cartwheeling to the garden gate, which is interesting given that she doesn't yet know how to cartwheel and we don't own a garden gate.