On the 13th July, Lazy Girl and Mini travelled to Hyde Park in London for the last day of Barclaycards Summertime Festival in Hyde Park. So, was it a fantastic festival or not?

Getting to London from Reading with a seven year old was pretty stress free, and luckily being a Sunday the Tubes weren't so busy that we couldn't find a seat. That was a great start as Mini had only been on a tube when she was in a buggy as a 6 month old so not something she could recall doing before.

Remembering previous festival visits, we decided to have lunch at the station before travelling to Green Park station, and that's a definite recommendation for any parent's venturing to a festival or concert this summer.

We did get a little lost, I've not been to that side of London before but we soon sorted our way out and arrived before the gig kicked off properly.

Amongst others, the main stage promised The Bootleg Beatles, 10cc, Boyzone, Little Mix and headliner Tom Jones. There were also smaller stages with X Factor runner up Amelia Lily and a host of newer acts. As it was very much a family festival, kids were catered for in the form of a fairground, live Zumba, a performance of Mr Men and Little Miss and an appearance by Hello Kitty. There was also  the Barclaycard Festival Theatre in an enclosed spaced. This is where we spent most of our afternoon. 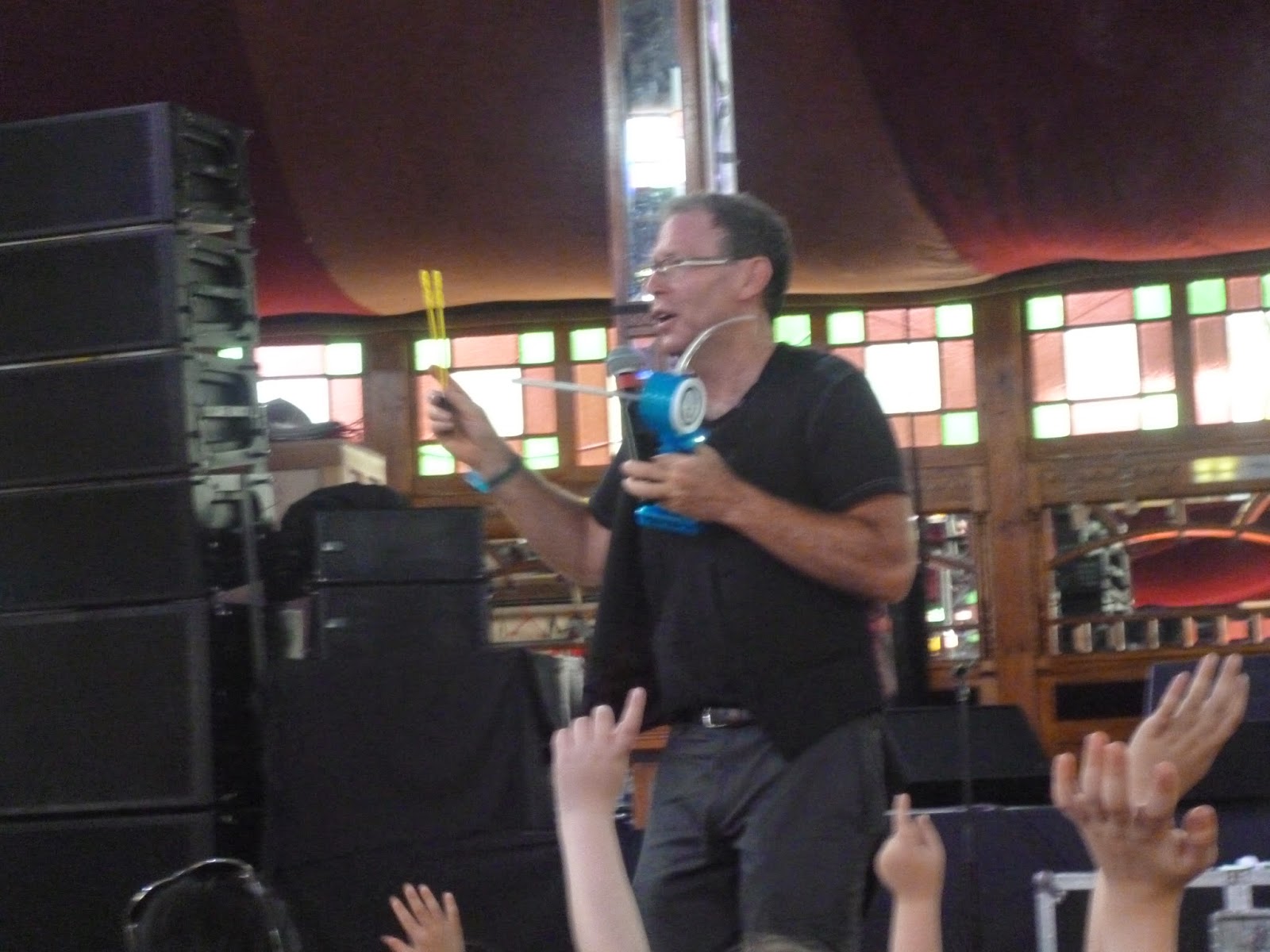 First up we saw Louis Pearl, the amazing Bubble Man, who kept the kids entertained with his science disguised as an excuse to make bubbles show. He was very happy to let the kids join in with his show, and despite the heat inside the tent (good idea for next year is leaving a hole in the roof perhaps as it was utterly sweltering) made the tricks work very well.

We then caught the last few minutes of Bootleg Beatles, who I had seen many years back. They didn't disappoint me at all, their act is spot on as are the costumes and mannerisms that they have clearly taken time to perfect. Playing all the old Beatles standards that most people will recognise, they certainly kicked off the Garden stage well. 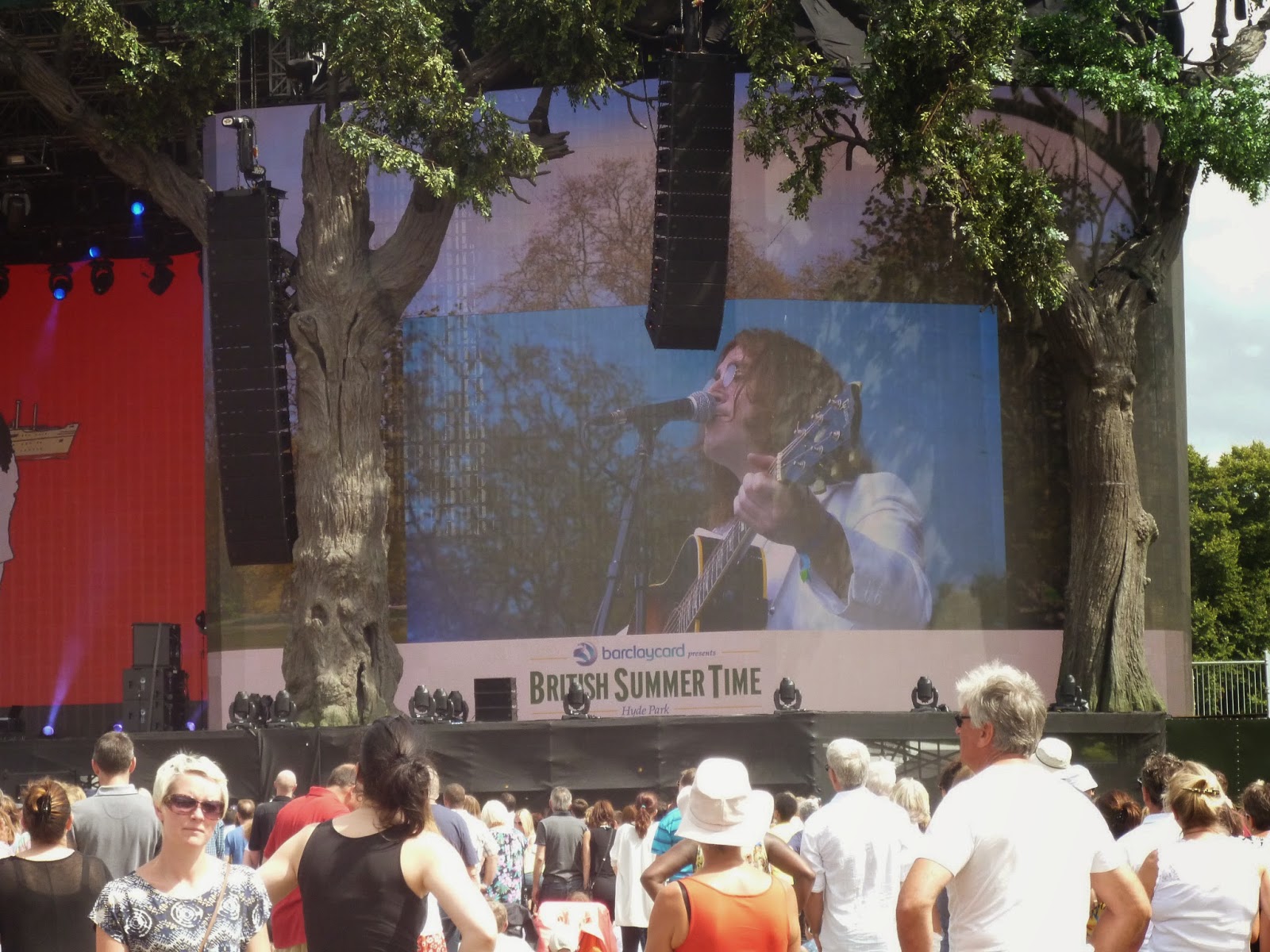 Mini, however, didn't agree, not being a fan of The Beatles or their copycat versions! The same was said for 10cc who I very much wanted to see, but who I missed as Mini was dying to see Horrible Histories.

Speaking of these guys, I think teachers could learn a thing or two on teaching history  to kids! We saw The Barmy Brits, and it was a riot of songs, gore and fun for adults and kids. Again, this show was high in audience participation, and kept all there in the rammed tent entertained with ease as a result. There were jokes for all ages, which certainly helped us parents too. 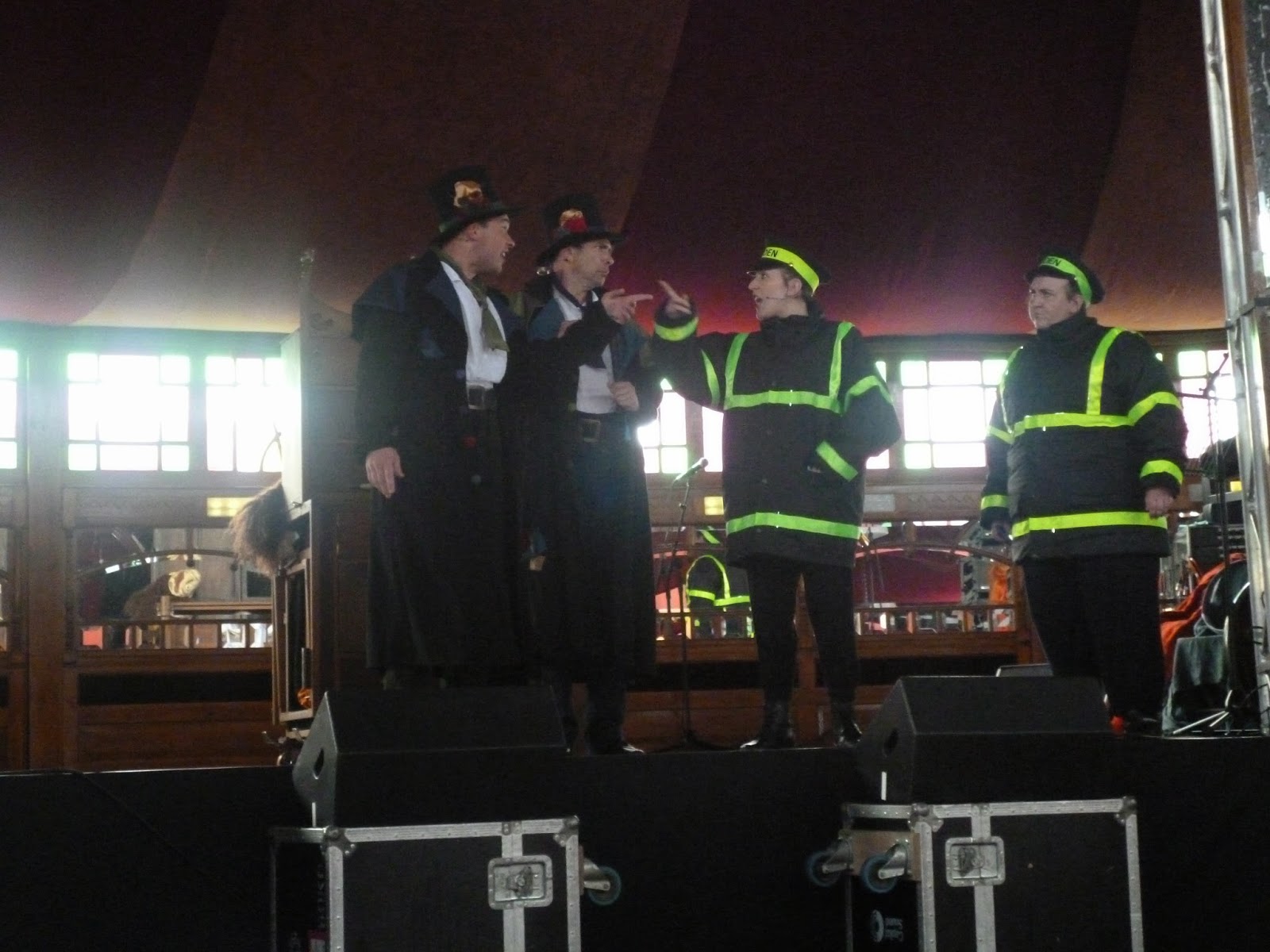 As expected, the heat meant drinks were a must have, but these were ridiculously expensive, at £2.50 for a small coke (less than a cans worth and minus ice) and £3.00 for a Magnum Ice Cream. The rides were pretty over the top too. This is  the same for most festivals of course, they know, especially with kids present, that you are very much a captive audience. Despite the price of drinks, there were no soverniers to be had, such as a programme, which was quite a surprise. 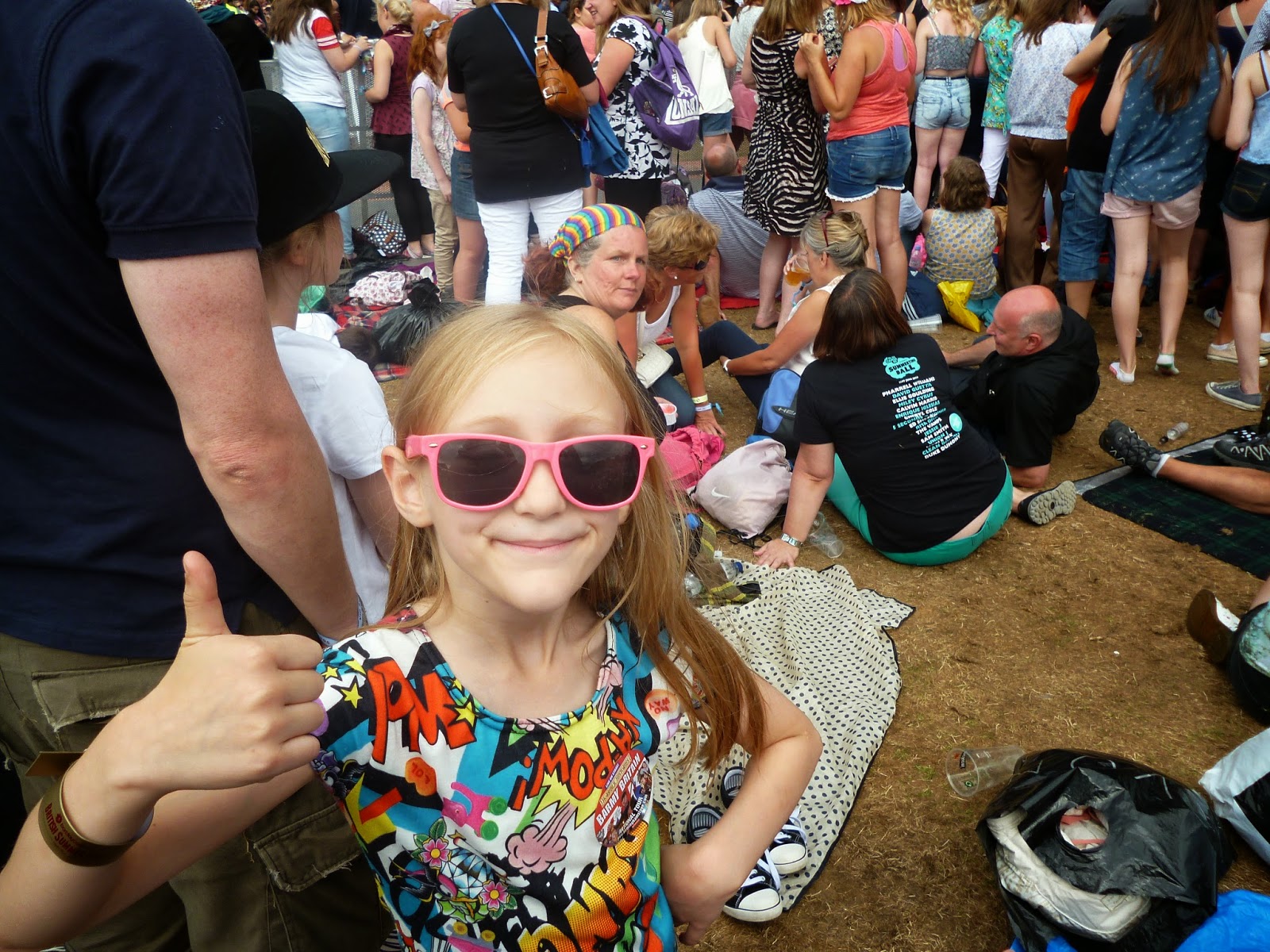 We did spot Hello Kitty walking through the park, at which point Mini and several other kids asked for pictures and hugs. Sadly, Hello Kitty's minders (yes, minders, for a dude in a costume) were pretty miserable and refused, leaving one smaller child rather upset (and no doubt their parents unimpressed). If you're going to be at a kids friendly family festival, you kind of have to expect to pose for a couple of pictures or the odd hug, and it did put Mini off approaching anyone else (and she was a little disappointed that her press pass basically allowed us a seat on a cushion in an area with a bar and not much else).

We didn't get to stay until the end, as despite being a Family Festival day, being a Sunday it didn't end until after 9pm, far too late for Mini who had school in the morning. 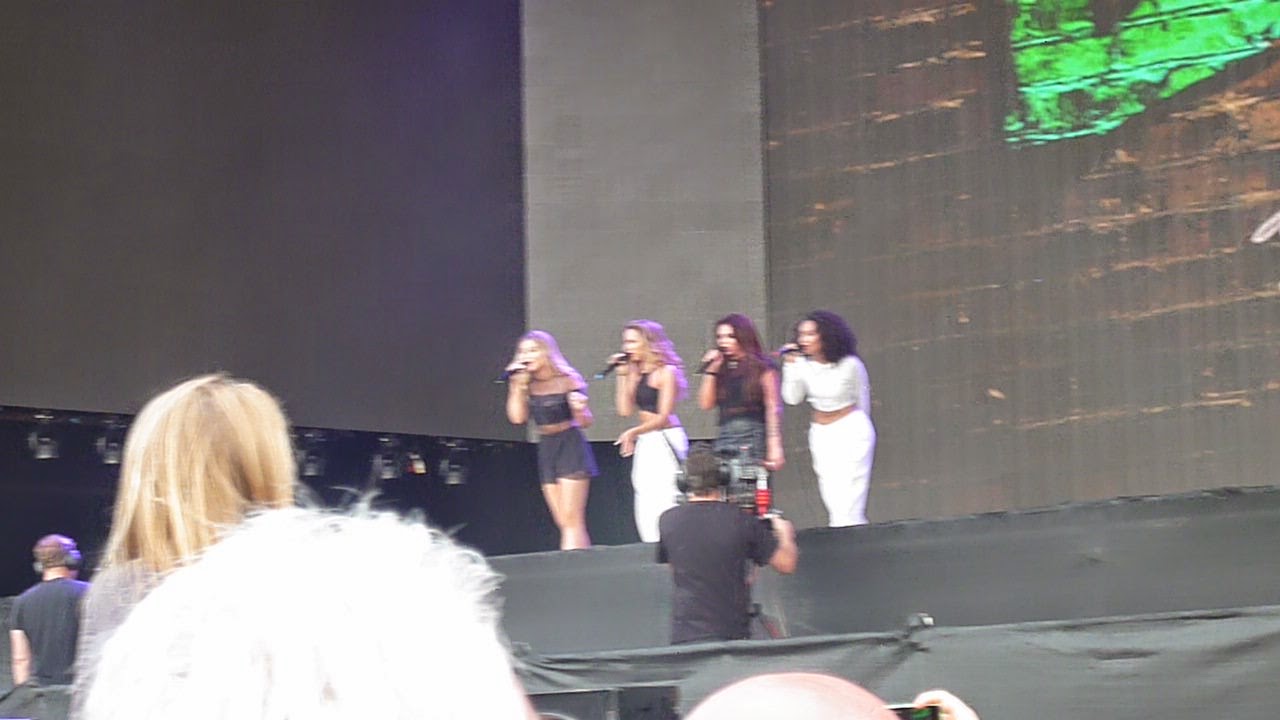 Here's Mini to tell you her view of the Festival and Little Mix's performance (which was surprisingly good).