Like most busy Mums, Lazy Girl finds the annual back to school uniform labeling task a boring chore. Stamptastic feels her pain and so suggested their Stamp kit....

Every year, without fail, I buy sew on or iron on labels for school uniform. After all, we know our little cherubs can, and will, happily leave a sweater, or an entire PE kit, where so ever they can. They then, in the case of my pair, forget where that was and chaos ensues.

Having a name on their uniform may not make them absent minded child proof, but makes the schools job easier when it's time to hand the items back. It can also make light work of searching in the lost property bin, something I seem to do on a weekly basis in term time.

However, despite my sewing the labels on, the Brats end up knocking these off, or fraying them, and,  despite iron on labels sounding easy, they tend to stick to the iron, the ironing board and in one awful, scar inducing incident, to my finger. Yet they do not stay stuck to the actual item of clothing they are intended for.

This means that, without fail, by he end of the first term, I usually revert back to a biro.

I had heard about Stamptastic, but hadn't tried them myself, purely because I was going with the "old methods are best" approach, forgetting the calamity that is sewing on labels you know will last no longer than a term.

We tried two stamps, one for each child, a stamp pad and a white fabric pen.

Ordering the stamps was a piece of cake, the website is very simple, very quick to use and within 2 minutes my order was made. The kids liked picking which icon they could have with their name, with Mini choosing a Butterfly and Littlest going for a paw print. There are a number of little icons to chose from to suit most junior school ages, and for the teens they can simply go without one and just have their name.
There are several fonts to pick from too, and if like my children your name is quite long, you can resize to fit the length.

You can pay via PayPal too, which I find I prefer online just for the security aspect of  using the net to pay for things.

In a few days, I received a well packaged parcel, ready to go and very user friendly. 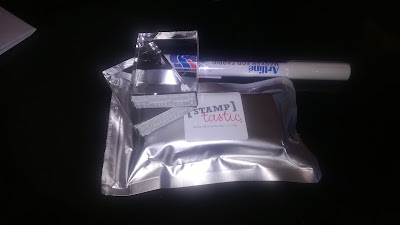 I had thought that the amount of uniform my two have would mean the stamp pad of ink would run out halfway through. I have so much uniform, as the school has winter and summer variations, as well as having winter and summer PE Kit, and swimming kits too. With my two constantly losing uniform (or having it pinched as with one of Littlest's shirts last year after swimming- everyone else came back in a shirt, by the time he got to the stage of putting his on there were no shirts left in the changing room, and we never got the worn once item back), we always buy extra when it's easy to buy cheaply from the supermarkets.

I stamped well over 50 items, and the pad barely looks like it has a dent in it. Its just the right size for the stamp pad too so you don't end up using too much and smudging the name on the label.

The white pen was also handy for some labels which had big logos and writing on them, as well as inside shoes and trainers that tend to have darker insoles. You simply shake it and dab it on. Leaving to dry for a few minutes means you can carry on stamping until its ready and then stamp straight over it.

It was so simple, and the result is really pleasing and clear or the child to look at it and know it's their stop, skirt or PE Kit. It also meant no sewing, no achy hands (I have arthritis in my fingers so sewing can be a right pain to that), and no burning my fingers either.

Of course, like most things they will no doubt fade after several washes, but for ease of use and being as stress free as they are, Stamptastic can't be beaten. Bearing in mind most Infant and Junior age kids will grow out of uniform after a year, so the fading wont matter too much.

You can buy Stamptastic stamps, ink pads and white pens, as well as other innovative items such as birthday and Christmas gift tag stamps at their website. The standard name strips are perspex and durable, and cost £10 each, whilst the white pen costs £4.99 and the ink pad £12.00.

£12.00 may seem a little on the expensive side but it's worth remembering this is not the same ink as you can buy in stationers, or that we got in sets as kids. Compared to name tags that are cheaper, the stamp sets will last for much longer and the fact it takes an annoying task and makes it take less than half the time I think its well worth it.

We can't recommend them enough.