Littlest is a typical boy who likes to get hands on with his toys these days. At 7 years old, it can be quite hard to find the right toy that isn't too easy or too hard. Interplay asked him to pick a kit to try out and he decided to have a go at a Wood Worx kit.

If there is a toy which will make Littlest step away from his laptop, it is a dinosaur based toy, even better if he can get hands on and make it himself.

The Wood Worx kit from Interplay is very solid, and so user friendly. Some kits are just too fiddly for his age, and end up causing tears and the odd tantrum. They also end with me covered in glue trying to show how easy it is whilst not making it look easy at all.

The set he tried took a couple of days in the holiday (handy when the weather was utterly awful), but not due to difficulty. He got everything out the box, had a quick look at the booklet, and off he went. 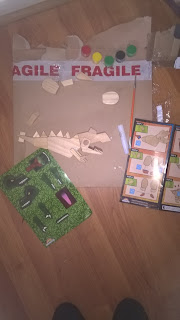 We're currently trying to instill a sense of independence in Littlest- he has just started Year 3 in Juniors, but has just also turned 7, making him the second youngest in his year, so he does tend to still cling to the last days of co-dependence. He also has the bossy madam that is Mini too, s it was lovely for him to take a box of parts and paints and produce a toy almost entirely alone (until Mini saw the paint aspect and designated herself artist for some of it). 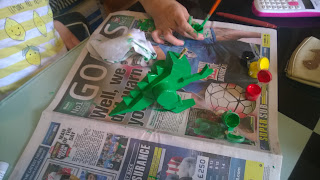 The sense of pride he had in himself after fitting the model together was great, he had thought he'd need help but not at all. The instructions were very simple, step by step, and being that the chunky model was pretty easy without the booklet made making the model a doddle.

There was plenty of paint in the box, as well as stickers for the face- although Littlest decided to forego these and make a freestyle "happy" dinosaur instead of a scary one. The set of course allows you to really get creative and choose for yourself.

It does take a little while to glue solid enough to paint over, but obviously you can't expect the glue to be super strength toxic stuff in a kids set and in fact it added to the fun factor as it wasn't all done and complete in a few hours- we stretched it out for several.

Mums will be pleased to hear that the paint is fully washable- Littlest got quite a bit on his clothes, hands and my glass table, and it washed off with a baby wipe from the table and a normal wash for the clothes. 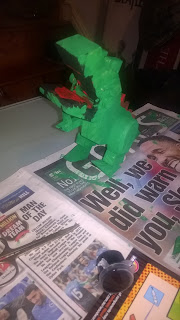 The only thing I would suggest is a bit extra glue as we ran out (but that's probably down to the liberal application of it by a heavy handed Littlest).

At £9.99, it's such a cheap way of getting a start in crafts and independent play, the price tag would suggest it would be flimsy but not at all.

We love the Wood Worx T-Rex, and you can see all the sets available at the Interplay website.