It's July, we have a mini heatwave in the UK, the summer festivals are on right now, and so it must be time for mince pies, Santa hats and talk of Christmas.

Yes, it's Christmas in July season here in the UK, and over two Wednesdays in two weeks, LazyGirl has been all over London seeking out just what brands think we'll lust over come December.

On the first Wednesday, unusually for The Family Panel, I had a helper with me- Littlest, who had to be in London for a hospital visit too. He was very excited as he has never been to anything like this before for our blog, so anything child related was left in his capable hands.

Our first stop was Morrisons, at One Marylebone, a really great setting to get you in the mood for all things winter related.

First up, Littlest was shown how to make Panettone with one of the Morrisons in store bakers.

It was great for Littlest to get dressed up in the hat and pinnie, and he really enjoyed copying exactly what the baker was doing. As for the all important taste test, it was a big thumbs up from Littlest. 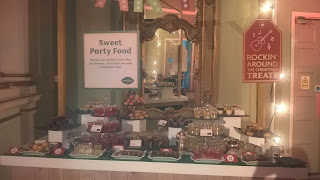 It was also great to see just how far Morrisons goes to check every ingredient, a big consideration due to the allergies which our youngest son has. There was no "oh maybe this might have nuts in it" everything was clearly listed and defined, which takes the guess work out of party food (and beyond). After all, you want to have fun, not a massive allergic reaction with your Christmas dinner.
The range of food and drink on offer is amazing, there was something for all palates and budgets, from the mini burger sliders (loved by Littlest) to the beautiful Norfolk Bronze turkey, and fizz for every occasion throughout the holiday season too.

It would seem Morrisons has listened to customers who may have started to shop at the cheaper stores like Lidl and Aldi, as the quality of the more purse friendly items was very good.
We also had a sneak peak of the clothing from Nutmeg and whilst that's not really Littlest's interest area (food, toys and tech and he's happy), I spotted some very well designed pieces for party, bedtime and Christmas morning.

A particular favorite was the girls partywear, which took in that not all young girls of Mini's age of nine want pink, cutesy and girly. Rather, my fashionista daughter wants the type of clothes worn by Little Mix (but toned down to please us parent's), so Morrisons had fierce biker jackets, funky dungarees which could be dressed up or down, and chunky knits to keep you warm as winter draws in.

For boys- one thing I'm sure will fly off the shelves are the range of Marvel 3D tops- yes, 3D on clothing! Which child wont want to show that off at a school disco next term?

Old favorites like comfy onesies and Christmas jumpers were also in attendance, and Littlest has already bookmarked the one he wants- featuring a "Santa- Define Good?" design to the front.
Again, the prices vary but are with quality and attention to detail like we saw, and clothes I would have thought were from Next or Zara, the prices are reasonable.

Next up, we went to Bank Tube for a Morrison's rival with Aldi and their Christmas showing.

We were handed a very handy IPad (I say we- I mean Littlest pinched it), to have a look at prices.

The food was pretty much a carbon copy of what we'd just left at Morrisons, but unfortunately most was to look at rather than to eat, so it looked very nice! We did get to try some wrapped chocolates, which were tasty, and I'd be  a box to receive a box on December 25th.

By far my favorite bits of Aldi's offering is their gifts.

Whilst it's true that Aldi tend to only have a short availability for non-food items, you can now order online and have them delivered, which is a bonus if your store sells out quickly.

Its also going to worth keeping an eye on their website as the gifts I saw were flipping amazing and despite looking like high end luxury items, were unbelievably cheap in some cases. For those looking for a cheaper option without losing quality, Aldi also offers a more budget friendly cookware range, which although wont last as long as the Copper, will still look good, cook well and give you plenty of years of use. These started at around a tenner.

Next up, Asda, who I always feel has lots to offer.

Again, there was a great mix of toys and food for everyone, we were very impressed with the quality of the Christmas decorations on offer this year, starting at under a pound. 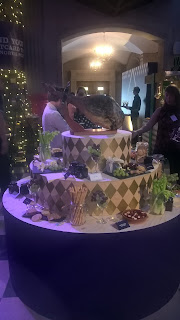 It seems that most supermarkets food and drink offerings are pretty much standard across the board, with Serrano Ham on a stand and chopping board being a particular favorite. Its all about the wow factor and indulgence at Christmas and the stores have this in spades. 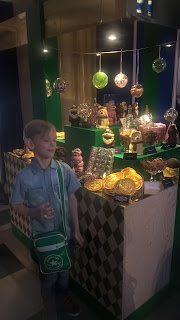 Again, Littlest was happy to see his fave toys will be available with new Lego sets, and lots of Marvel too.

Next up in part 2, we cover Poundland, Argos and Currys PC World.

We will update with prices and some more images soon!