If you missed Part 1 you can find it here, where I give you a sneak peak (along with my helper for the day, Littlest) into what Aldi, Morrisons and Asda have on offer for 2016.

Next up, another Wednesday and this time no Littlest who sadly had to go off back to School (with much persuasion after a day spent eating cake and playing with cool new toys).

First up, back to One Marylebone for Currys PC World.

It was tech heaven here! I am not kidding, I am half surprised I'm not still there, looking at all the amazingly cool gadgets on display. 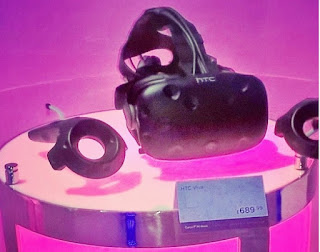 Now that the two stores have merged, not only do you have all your kitchen and home gadgets sorted, you also have all your PC, tablet and even Virtual Reality covered in one place too. 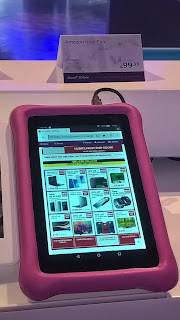 Yes, I did say Virtual Reality. It is here, but it's probably going to take either a very large credit card bill or a few years before the majority of us can own it in our homes. The one pictured above, from HTC, was at the lower end of the cost bracket at nearly £700, but I did see another for £900!

However, if you prefer not to enter an alternative dimension (or value your credit rating), there were plenty of nifty Tablet computers for all ages. A particular favorite was a kid friendly Amazon Kids tablet with bouncy sides to stop it breaking when dropped. At £99.99, it is pricey for some, but if it's anything like my Kindle Fire, the kids will love it and it's a speedy little machine for kids gaming and for homework research too. 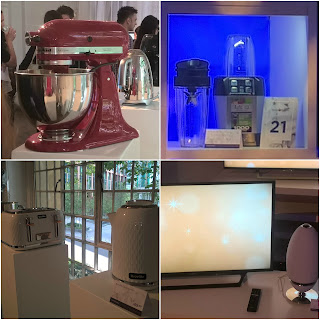 As a kitchen gadget lover, I was very impressed with the shiny mixers, of which there was an abundance of brands and colours to suit all kitchens. I particularly liked the range of Smeg kitchen accessories, which featured an unusual lattice design with chrome accents.

There was also a great display by chef Luis Troyano, who used many of the gadgets to show us how to make delicate and tasty meringues, and a very Christmassy Mulled wine (although at 11am, it was a little early for me to indulge ad successfully make it around London!).

Next up, Argos, who always seem to have everything covered across the board in one catalogue.

I love Argos at Christmas as I have many happy memories of the Christmas book being available and of grabbing it, biro in hand and circling all the goodies I wanted to find from Father Christmas as a child.

I went straight to the toys and it has to be noted that Argos definitely put on an amazing experience for us to go back and write up. I've not been to many events where the adults are encouraged to play on the bikes and scooters in the middle of the space.

It was also great to see children there who you can ask what they thought of the toys too. There was plenty to see, and the guys from Argos were very knowledgeable on release dates. 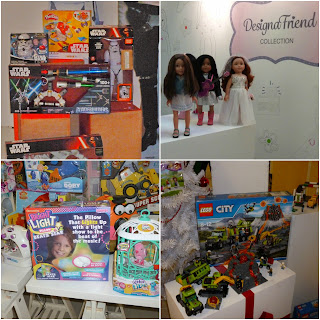 Lego is a massive fave in our house, with Littlest dying to know when the new Ninjago sets are coming out (September in case you also wanted to know). Considering how long Lego has been around, I feel it carries on its success across generations as it taps into the modern world. None more so than with Lego Nexo Knights. These are more than just sets, including an app and TV show, where the child is encouraged to collect special shields to unlock features in the game.


For doll lovers, and all things pink, Argos is a one stop shop. I was impressed with the great range of varieties, from well known brands such as Zapf to Argos own versions, all budgets are covered, from the big toys to the smallest gift.

Gamers are sorted too, with new add-ons coming soon for Wii U, XBox 360 and Playstation too. I really loved the Lego Dimensions sets for Wii U, and like that boredom factor is taken into account with the unlocking of new levels and features. I also think that incorporating the building of Lego into the game is fun too and harks back to my days of building a house for fun! 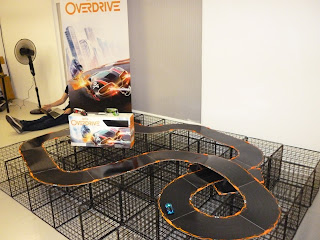 Another interactive toy which I got to try out (and I'm sure I was allowed to win) was the ONKI Overdrive. Think traditional Scalextric and add a phone and virtual rocket launchers to stop your opponents car! Using a sensor filled material, you place your race car- or lorry which is coming soon- to the bendy track, pick up your mobile with its free app and play along. Unlike the Scalextric, the cars don't leave the track and aren't restricted to one lane, and there's no bits of plastic to attach which will break after a bit of a tantrum. I really loved this toy and for £150 for the starter set of two cars and lots of track, which can be added to, it's a toy I feel that would go down very well during Christmas and beyond. 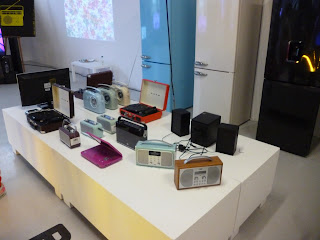 Now, there is sometimes a certain level of feeling that everything from Poundland will be rather plastic and cheap and cheerful.

Now, cheap, yes, cheerful, plenty, but plastic and not all that good? Never!

I was really impressed with the level of diversity available, all for £1. I loved the decorations- something that I know from going into the store at Christmas are always very popular. There were ranges which would convince people you'd shopped in the likes of John Lewis, with particular mentions for the wooden handcrafted fox and owls.

For Marvel, Secret Life of Pets and Frozen lovers, Poundland has a range that not only includes funky baubles for the tree but sweets, colouring books and stocking filler toys too. For a few pounds, you could sort out all the friends from school with quality Christmas gifts.

For older kids, look out for the new ranges hitting soon of make up and jewellery sets too.

You will ask yourself "did I really get this for a quid?" and of course, for those who find Christmas a budget nightmare, Poundland should be top of your list.

After viewing the Christmas shows, I'm up for some snow and turkey as soon as possible!

Hope we've given you some ideas for this year!